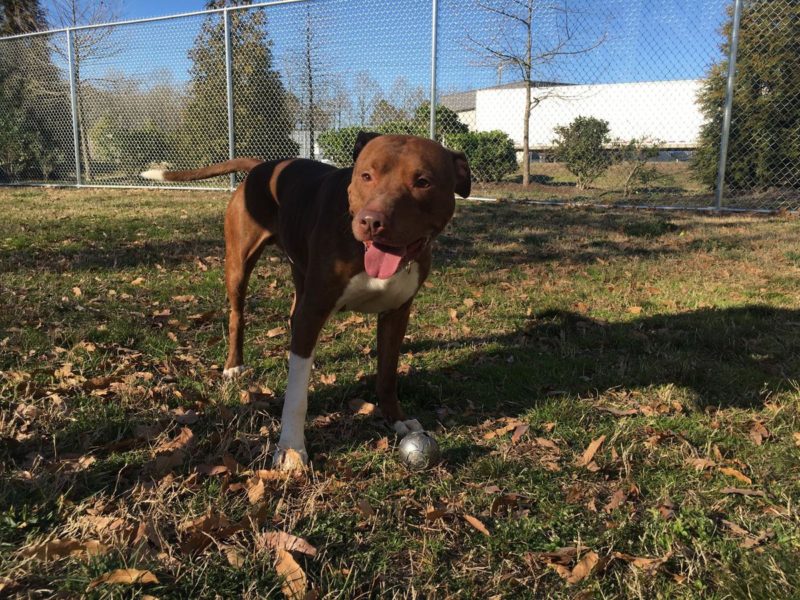 Reposting from an article originally published by The Virginian Pilot on Feb 23, 2017 by Arleen Spenceley

Gauge, a pit bull mix, aimlessly roamed until he saw the ball – then he charged, full speed, toward it.

Until earlier this month, there was no place at the shelter where dogs could do that. But thanks to donations collected since the spring, there’s a new play yard, McLaughlin said.

A fence surrounds the 4,796-square-foot outdoor space, which provides the shelter’s canine residents with exercise.

Staff and volunteers walk the dogs on leashes two to three times a day, McLaughlin said.

Prior to this, dogs had to use the shelter’s two original play yards, but they weren’t big enough “to have lots of room to play,” he said. And animals coming to the shelter need exercise, he said.

“Most of these guys have been in homes at some point,” McLaughlin said. “Then they come to this place. It can be scary for them. They see the bars, dogs barking, new people.”

That can stress dogs out – and the shelter’s staff aims to reduce that tension. The more stressed the animal, the more rambunctious it might be when it interacts with people.

“Sometimes dogs will be so amped up about meeting (potential adopters) that they scare them off,” McLaughlin said. When a dog is well-exercised, “the calmer they tend to come across. It helps us find them a home.”

Last spring, the shelter made an appeal to its donors for financial support for the play yard project.

“While we did get a decent amount of money in support of it, it was only about a third of what we needed,” McLaughlin said.

So, on Giving Tuesday in November, the shelter announced that all of the day’s donations would go toward the play yard. But the shelter still came up about $3,000 short, said Carroll Williford, who hosts the annual Woodland Christmas Wonderland, a Christmas light display in Chesapeake.

For four years, the Williford family has collected donations at the event for the Portsmouth Humane Society.

They upped their collection effort this winter for the sake of the play yard.

When guests showed up to walk through the 2½-acre holiday attraction, the Willifords told them donations would help cover the cost of the shelter project.
“People love coming to see the lights, but they do like the fact that we’re helping the Humane Society out, too,” Williford said.

They ended up collecting enough to make the play yard, which cost $10,100, a reality.

The yard features balls for fetch, a tunnel for running through and a gadget that blows peanut butter- flavored bubbles. It also provides potential pet owners with a place to play with pups before deciding whether to adopt.

And so far, the dogs are enjoying it.

“I saw four different dogs playing (in the new yard) yesterday afternoon and they were all smiling,” Babs Zuhowski, the shelter’s executive director, said recently. “I’d say we were one hundred percent successful in finding a way to enrich their lives.”