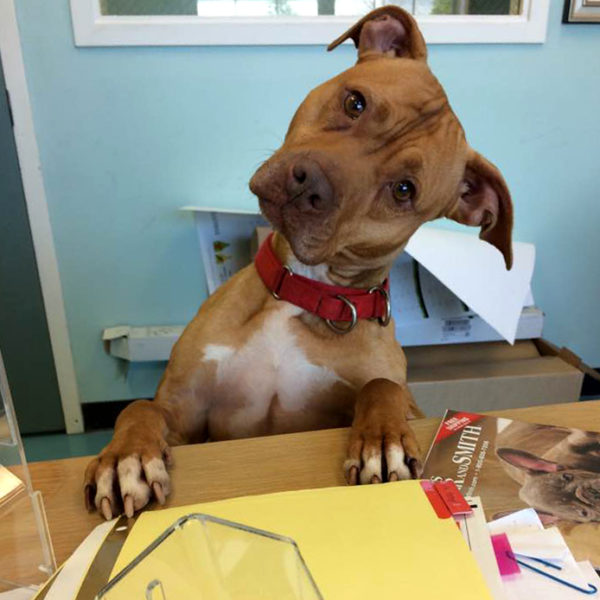 Soon after I was offered the position at PHS, I took some time to educate myself on Pit Bulls and the bully-type breeds. During my self-guided tours of the facility, Pit Bulls were certainly the predominant dogs. I dove into books, documentaries and even YouTube videos to fully understand the popularity of “Pitties.”

I must admit, I had a biased opinion. My only interaction stemmed from a dog outing with our first rescue Weimaraner at a Care-A-Lot building back in 2006. My young daughter and I were shopping with “Nic” in the warehouse section of Care-A-Lot. Around the corner came a small (45 pound) Pit Bull puppy and his owner. I asked if he was friendly, and the owner said ‘yes,’ so I proceeded to allow Nic to sniff. In a few seconds, the pup snarled and then snapped at Nic. I quickly pulled him back. Nic had a permanent piercing on his ear from that interaction.

I was jaded for many years. As an owner of rescue dogs, I’ve always said, “There is no such thing as a bad dog, unfortunately the same cannot be said of people.” Be it lack of interaction and socialization, dogs of ALL breeds can be deemed “bad dogs,” due to poor training.

Every Pittie with whom I’ve interacted at PHS has been affectionate, smart, playful and incredibly intelligent. A few we’ve had here are so smart that they begin to struggle in this captive-type environment. Zach Flota, one of our Animal Care Managers, noted to me during my first month, “This is a wonderful place and this is a terrible place.” So very true. We save animals from the dangers of the great wide world by providing a safe harbor; but imagine being confined every day in a cement cell or a stainless steel box. Breaking up the monotony of daily routine helps all our animals. We are in the process of developing an even greater Animal Enrichment Program. By June, we will have a full-time Animal Enrichment Specialist on our team. Our goal is to provide our animals with the extra help and stimulation to mentally make it through their time with us until they are adopted.

Though Pit Bulls have been in the negative spotlight in recent years, there was a time in America’s past when the breed was revered. “Little Nipper” was the famous dog who listened to the Victor Record Player with his head cocked much like Daisy (pictured). “Petey” was the beloved Pit Bull who hung out with Spanky, Alfalfa and the gang from “the Little Rascals,” shown below.

If you haven’t visited PHS in awhile, I invite you to come and see us. Support from our community is needed on a variety of levels: volunteering, donating supplies from our Wish List, becoming a Foster Parent, or simply walking through and visiting our homeless animals. With your ongoing support, we can continue to provide a wonderful place for the stray, abandoned, and sometimes neglected animals who come through our doors.