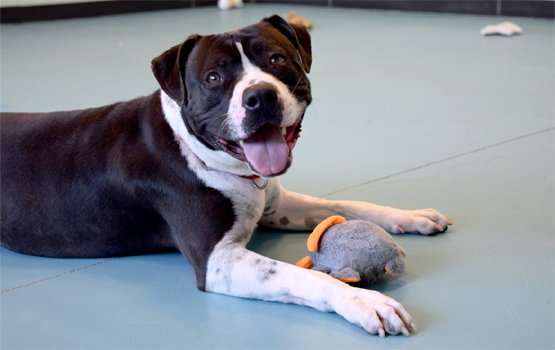 Knuckle is a jester. A black and white “tuxedo” pattern splatters his coat and he just looks like he’s thinking of a way to play a joke. I have dog-TV outside my window and I regularly see happy interactions of volunteers, staff and a dog in the new play yard. Knuckle was romping out there this morning with his human playmate. He had the long knotted rope dangling from his mouth. He jetted past his two-legged friend, taunting him with the toy; close enough to be grabbed, but not at the speed he was traveling. Consider yourself lucky, if you’ve ever been able to win “capture the rope” with Knuckle – his favorite game is tug-of-war! His goofy demeanor is not unlike many of his Pit Bull Terrier ‘cousins’ at PHS.

Hours later, I went back into the interior kennel corridor to pass out treats. Knuckle waited patiently at the far end of the kennels for me to arrive. His front spotted legs gracefully perched on the gate as I fed him a treat. Now his character was different. Not overly active, he watched me as I turned to walk away. When I questioned a staff member about Knuckle’s kennel behavior, they said it was normal. The exuberance of his play yard personality is squashed – literally in his small kennel area. 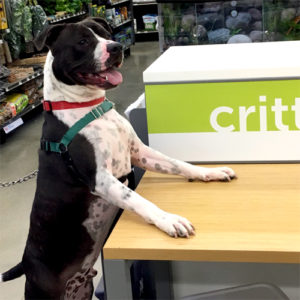 Knuckle went on a “dog field trip” last weekend to the Petco in North Suffolk. He had fun greeting and smelling anyone who would come his way. Shari, Stephanie, and Corinne (the volunteers who accompanied him on his journey) said they knew Knuckle would sleep well Saturday night—he was sound asleep in the car coming back to PHS and snoring the whole way!

Knuckle is currently our longest resident. He’s had several interested families, but he needs to go to a home without cats or small children as his playful behavior is powerful. Powerful is not a bad thing; he is a strong dog and simply needs some guidance to take him to the next level of training. He already knows “sit” and “shake” and is eager to please. So why is he still with us? Well he’s ordinary looking (though I think his formal black and white ‘attire’ makes him look regal). In the kennel, his spirit is somewhat dampened, so he’s not the dog who will come up to the gate with a wiggling butt and wagging tail. Often when a family shows interest in Knuckle, it is because of his calmer disposition in the kennel. They are soon surprised to learn just how much playful energy he has once in an interaction room or the yard. 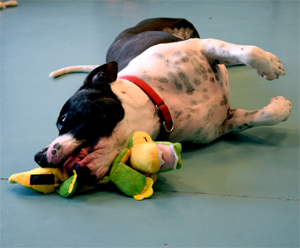 The obstacle Knuckle faces in finding his forever home is the same as many of his shelter companions. He waits patiently in his kennel, showing mild interest in those that pass by his gate, containing his enthusiasm. When there are no people walking through, boredom gets to him as he looks for other things to occupy his mind; a new scent, the sound of the train going by or perhaps the sound of a new neighbor. He has learned the daily routine so he knows when to expect breakfast, lunch, and dinner. He is already eager for his walk before an Animal Care Technician even reaches his kennel with a leash. As you can imagine, when Knuckle has the chance to get out of his kennel to stretch his legs and take in new stimuli, it can be an overwhelming treat.

Do you have zest for living? Knuckle and many of our Pit Bull Terrier crossbreeds do! Whether you’re looking to adopt, foster or volunteer, make your next “Pit Stop” at PHS.

By Babs Zuhowski in collaboration with Zach Flota